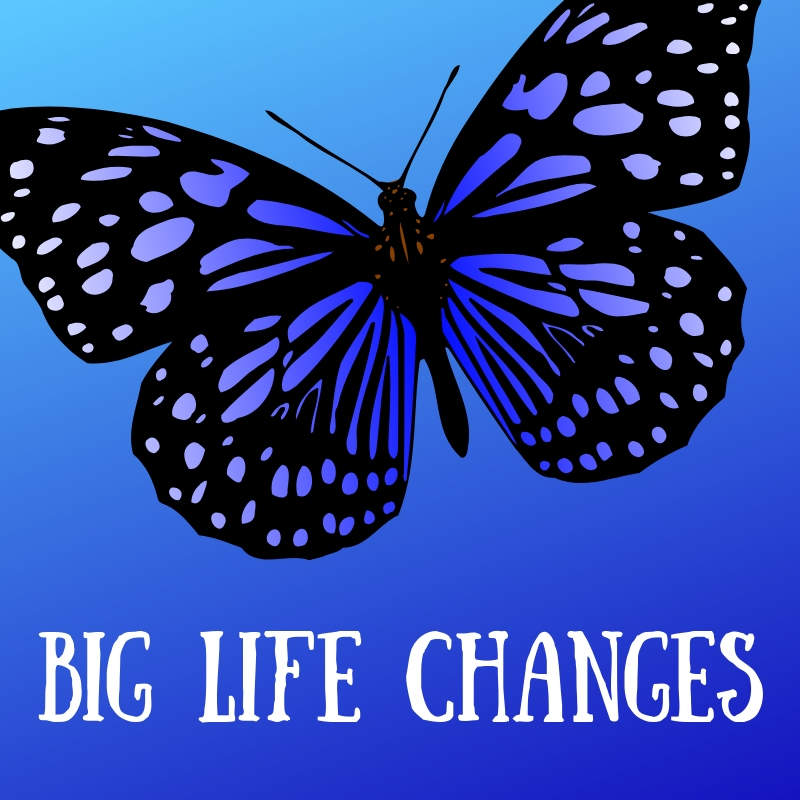 An unexpected diagnosis. Irreconcilable differences. Relocating. A career move. Aging parents. A new home. You might consider these to be big life changes, right?  Oh honey, that would be a Yes! They happen to people every day in this thing we call life. Sometimes our lives have to be completely shaken up, poured out, changed and rearranged to direct us to unchartered waters. Waters we need to swim through – despite our reluctance, uncertainty, and fear. I’ve been way off the grid lately, due to a big change going on in my life. Going through a major life change is really no big deal, said no. one. ever. It’s a big damn deal.

So, how can we best cope with big changes? Keep reading. I found an article with some good advice on that very question.

How To Cope With Major Life Changes | By Shana Aborn

When was the last time you had to deal with a big change? For many of us, disruption to familiar routine sparks anything from mild anxiety to extreme terror. Maybe something’s been pushed on us, like being fired or getting sick. Just as likely, we’ve made a risky but necessary choice, like relocating to a new town or getting a divorce.

Shift happens, like it or not—that’s part of the human experience. Then why do we resist so much? It’s partly a natural fear of the unfamiliar. “People think of change as something dangerous,” says Auriela McCarthy, author of “The Power of the Possible” (Beaufort Books). “But it helps to remember all the ways your life has been altered in the past and realize that not only did you not keel over and die, things often turned out for the better.”

Fighting what’s happening just leads to frustration and keeps you from growing to your full potential. “When you try to put your life in a box and keep it the same all the time, you’re making something dead out of it,” says Joan Borysenko, Ph.D., coauthor of Saying Yes to Change (Hay House). Welcoming new things can even be good for your health. “People who greet what life offers with curiosity have stronger immune systems and live longer,” Borysenko adds.

So how do you push past the reluctance and fear? The first step is realizing that even though you can’t control what pops up in your life, you can alter how you react. “When change happens, say ok. Learn and grow from it,” says Borysenko. Taking a live-in-the-moment attitude will help keep you from sinking into what-ifs and should-haves. Another attitude booster: Think about people you respect and love who have faced difficulties head-on and come out stronger for it. Reflecting on their success will open you to the idea that new possibilities lie ahead for you, too.

Ok. Let’s put this article on pause for a moment.

I’m going to butt in right here and spill the tea on why I’ve been a bit MIA on my social media pages and website over the last few weeks.

I’m going through a divorce.

Yes, a divorce. This is where my time and effort is going right now, as it should be. Which leaves me with little to no mental energy for posting on Facebook, Instagram and Twitter, or staying focused and engaged in the blogosphere. There is no way to balance it all at the moment. It’s a big life change and a difficult change at that. I do have faith that my family will navigate through these rough waters just as we did after my sudden vision loss 5 1/2 years ago.

With that said, let’s get back to the article for what I thought was some good advice about this.

The most important thing to remember, though, is that you already have the inner resources to make the most out of anything that comes your way. Bring out your natural resiliency by taking a look at how you can deal with some of life’s major changes – including divorce.

Major Life Change: Getting A Divorce

Why it’s scary: Even if you initiated the split, or totally agreed to it, the reality can sometimes feel like you’ve lost a limb. Habits and daily routines once dictated or influenced by another adult are now up for grabs. “After my first marriage ended, I felt like I was suddenly living in a vacuum,” says McCarthy, who was inspired to write her book when she realized how much her resistance to new things had tainted not only her marriage but also other relationships.

How to deal: Refuse to let fear or anger dominate you. “If you’re caught up in being a victim, you can’t gain any kind of wisdom or take responsibility for creating your best life, because part of you is still locked in the past,” says Borysenko. “Once you realize you have no choice but to change, many interesting things can start to happen.” Now’s the right time to lean on your support group—even if you have to invent one first. “I made a list of all the people I could call and get together with,” says McCarthy. “I felt stronger and safer knowing I had lots of people I could turn to.

Instant sanity-saver: Exploit your new freedom. Try things you’ve always wanted to do but couldn’t or didn’t get around to while you were married. Sign up for a painting class, join a hiking club, take up a sport, make plans to travel, or audition for a community theater production.

Alright my lovelies, let’s stop reading the article. I’m going to wrap this blog up.

Well, now that you and all the other fabulous GGB followers know what’s going on with yours truly, please bear with me as I map out these new waters. I suspect I will sink a little and swim to the edge along the way – yet always looking forward no matter what other people think or say. (Note to self: Bring floaties, fuck offs, and assorted fine wines).

I promise to be back interacting on social media and my blog more regularly real soon! Will I write about this experience? Hmmm, we shall see. Yes, pun intended.

*Parts of this blog is from the article, How to Cope with Major Life Changes by Shana Aborn which was originally published in the January 2009 issue of Family Circle magazine.